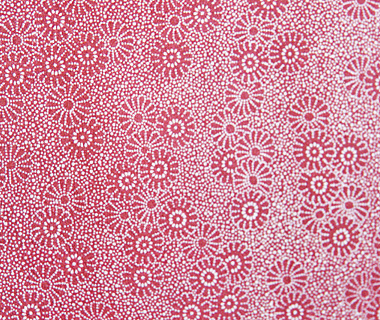 When you go to a special party, what will you wear? One of recommendations should be, of course, kimono, which will attract other guests for the gorgeousness. However, you may think the patterns of kimono are too conspicuous to wear, especially if you are a novice of kimono. It certainly needs some courage to wear kimono at first. Is there not some kimono perfect to such people? Of course, yes. Let’s try Tokyo somé-komon.

It is a method to damask fabric with pattern paper. It is also called  “Edo-komon” and it is better to think that Tokyo somé-komon is the official name designated as one of the Japanese Traditional Crafts, and Edo-komon is a kind of brand name of that. “Komon” means “small patterns”, and as it suggests, this method provides so fine and small patterns on fabric that they are quite seen as plain at a glance; the kimono of Tokyo somé-komon is modest but is simultaneously attractive and prestigious enough as kimono.

The history of Tokyo somé-komon

The start of Tokyo somé-komon is the Muromachi era of Japan, approximately 14-16th century, but it was not until the Edo era, 17-19th century, that it became broadly known to people; many samurai in Edo began to put small patterns on their formal clothes, Kami-shimo. Most feudal domain had their unique pattern, Sadamé-komon, to put on as a crest of the clan. Meanwhile, the samurai in Edo era were not allowed to splurge, and therefore, they could not wear peacockish clothes. The fine patterns that look plain at first sight allowed them to enjoy wearing attractive dress secretly.

In the middle period of the Edo era, the pattern came to be loved by women as well, and many new patterns were given a birth to. Some of them were made as an auspicious pattern for play on words or lore. One of such examples is a pattern named “Hatsu-yumé”, which means the first dream of the New Year in Japanese. It has Mt. Fuji, hawks and eggplants on the pattern, for a lore says that these three are auspicious if you see in the hatsu-yumé.

In the Meiji era, the middle period of 19th century to the early 20th century, samurai became de facto extinct, for the Meiji government abandoned the social class; therefore, Kami-shimo also became obsolete. In addition to these change, the trend of the nation was toward Westernization and many people preferred to wear such clothes of the West. However, the small patterns once loved by samurai survived this difficulty as a pattern for ceremonial kimono for ladies.

In these days, the kimono of Tokyo somé-komon is mainly seen at wedding parties, Japanese tea ceremonies, special dinners, concerts and so on. On the other hand, it is true that more and more people are becoming unaware of the beauty of kimono now, so some people make something other than kimono with Tokyo somé-komon, such as scarf.

What makes Tokyo somé-komon so exquisite?

As mentioned above, the patterns of Tokyo somé-komon is so fine that it’s almost plain. For example, one of such patterns, named “Goku-zamé”, has as many as 800 to 1,000 dots inside a 3-cm square. How can this be possible?

However, too many craftsmen have gone out of the business so far, some people say. Tokyo somé-komon, the perfect combination of two greatest skills, definitely requires the both experts. Now, one of remaining Somé-ya says, “These days, the quality of pattern paper became less good than before. I hope that the technology should be brought down to the next generation.”

When to wear Tokyo somé-komon?

Actually, kimono of komon are generally not good to wear at formal events. When you wear kimono at such events, you should make sure the pattern of the kimono should not be upside down. Many “komon” patterns do not have upside nor downside, so this is not suitable as clothes for ceremonial event. However, because of the history mentioned above, Tokyo somé-komon is exclusively allowed to put on at such events. On the whole, the more formal the party is, the finer the pattern should be, for the finer the pattern is, the more formal and prestigious it is.

One thing you should remember is that there is another Tokyo somé-komon brand, Tokyo osharé-komon. This line produces creative patterns for much more people, so most of them are not good for formality.

How to wear Tokyo somé-komon?

All of all, the color you should wear is the one you want to. Or, you can also choose the obi to fasten your waist first. If you choose the obi of the color similar to your favorite Tokyo somé-komon, your style will be chic. On the other hand, choosing the one of the opposite color will make you more flowery and conspicuous.

If you are completely at a loss about what to choose, the modern trend is pastel-colored one with modest(-like) pattern. Such kimono is perfect for many occasions, including some special parties or formal events. So, how about wearing Tokyo somé-komon and attracting other guests at your next special party? They will ask you, “Your plain kimono is so nice,” and you should say, “Actually this is not quite plain. This is called ‘Tokyo somé-komon, and you can see the fine patterns at a closer look. Will you?” Oh, you have a good excuse to get closer to an attractive person, don’t you?