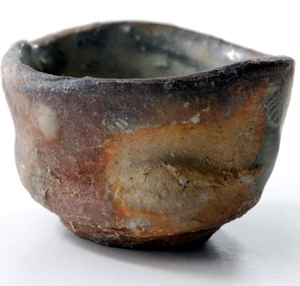 The History of Iga Ware

Iga Ware (伊賀焼) is a pottery from Iga City, Mie Prefecture. Your first impression of Iga Ware might be a little rustic or too plain, compared to other Japanese traditional pottery. However, you will sense and realize the beauty and charm of it throughout getting to know its history and features. It is considered that Iga Ware was started about 1300 years ago. The age was called Nara Period (ca. 701-794) in Japan, and a traditional pottery called Sueki had been baked a lot. In the early stages of Iga Ware, it was baked only for an agriculture use, such as simple pots storing seeds, and gradually Iga Ware was started to use for tiles of temples. It was the beginning of the 17th century when Iga Ware became widely known all over Japan. The 17th century in Japan was the age when chanoyu (the tea ceremony) flourished. Since a lord of Iga region had a thorough knowledge of the tea ceremony, potters started to bake pottery for the tea ceremony at the lord’s behest. This was the perfect chance for Iga Ware to flourish as well. In 1669, however, mining clay from specific mountains holding the crucial clay for Iga Ware got prohibited to prevent it from over mining, and Iga Ware started to decline gradually. In the middle of Edo Period (ca. 1716-1789), potters of Iga Ware acquired glazing skills in Seto region (where Seto Ware is baked) and made efforts to revive Iga Ware. Kilns of Iga Ware are usually built with stepped chambers, and firewood kilns were the common style of it. Until 1965, firewood kilns was the mainstream, and it was shifted to coal kilns and electronic kilns. Nowadays, gas kilns is the mainstream because it is superior to other types of kilns in combustibility and thermal efficiency. However, it does not mean that firewood kilns are inferior to other kinds of kilns. The unique feature that only firewood kilns can create is Shizen-yu (natural glazing). Shizen-yu occurs when ash in the kilns piles up on the surface of pottery several times and melts in the heat. The melted ash turns to be glassy and becomes like a glaze. Since this glaze happens naturally, its finish varies from one to the other. In other words, you can never get the exact same pottery. This makes each Iga Ware baked in firewood kilns special, and people cherish it very well. Since some firewood kilns still fire pottery a few times of a year, it is possible to see and feel the traditional techniques even nowadays. If you interested in, it would be fascinating to visit the kilns when they held the performance.

At the first sight, Iga Ware looks very simple and has few points to mention. In this paragraph, we take a close look on each feature of Iga Ware. Firstly, Iga Ware has specific patterns on its surface. The patterns are usually waves or cross stripes, and they are made with pallets. Especially pitchers and flower vases of Ko Iga (the early stages of Iga Ware) have this patterns a lot, furthermore, they have a pair of ears. Secondly, Iga Ware, especially Ko Iga (old Iga Ware) is very warped. The fascinating point of this feature is that the warped pottery is well-proportioned before potters finish it up. In other words, potters dare to shape pottery into an imperfect form. This is related to one of the unique Japanese perspectives or ways to appreciate beauty. It is getting to be commonly known that Japanese find beauty in something fragile or short-lived, such as cherry blossoms, more than other nationalities do. Finding out a beauty in imperfectness is another example of special Japanese perspectives towards things. The third feature is Shizen-yu (natural grazing) as mentioned in the last paragraph. This glazing happens automatically in kilns, but it does not mean that potters do not have any clues how the pottery would be after that. Surely, it is impossible to guess how exactly the pottery would look like after baking, but until some extent, potters are able to estimate how the glaze could be applied on the surface and adjust many factors to make the finish to get close to what they want. Since Shizen-yu is very unpredictable, it requires potters a lot of experiences to control its finish. The last yet not least feature of Iga Ware is the feeling of clay. Many of Iga Ware are created to cherish the color and the touch of clay. It does not necessary mean that Iga Ware has a very rough texture. The texture is often smooth rather than rough. As Iga Ware flourished as pottery for the tea ceremony and the tea ceremony was the symbol of the high culture, potters were very careful in creating a pleasant touch to users’ fingers and lips. Potters have been particular about the texture since then. Besides that, Iga Ware makes us feel warmth by its beautiful color of clay. Interestingly, Iga Ware can also give the pleasantly cool impression by doing one step before you use it. If you rinse the pottery with water right before you use them, drops of water make the color of pottery stand out and make a beautiful contrast. Iga Ware will be able to make food look even better, especially when you put a cold meal on it in the summer.

As mentioned in the last part of the former paragraph, the clay of Iga Ware plays an important role to give it uniqueness. The clay is mined from a stratum called Ko Biwako sou (old Biwa-lake stratum), and this stratum contains a lot of carcasses of creatures or plants. When the clay gets fired in the high temperature, the carcasses burn out and leave numerous fine air bubbles in the clay. The porousness clay is also called as ‘the breathing clay’. Besides that, this clay has extreme infrared radiation effect, so that it does not get cold easily. In other words, this clay is ideal to make pots and slow cookers. Actually, one of the most popular Iga Ware is earthen pots, and it is the best to bring out umami (*Japanese expression; the substance that makes us feel the taste of food or the material which makes us perceive that the food is delicious) out of ingredients. Recently, Iga Ware has been getting more popular and introduced to many families. Iga Ware has more varieties, such as casseroles (steamers) and smokers (smoker grills). It is very delightful to see that Japanese traditional crafts adapt themselves to present daily life.