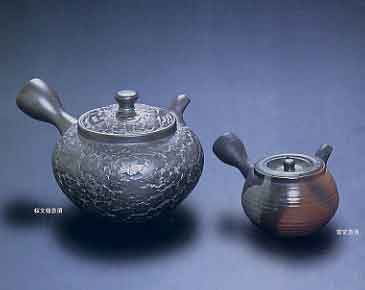 What Is Banko Ware?

Banko Ware (萬古焼) is from Yokkaichi City, Mie Prefecture. It is also called as Yokkaichi Banko Ware. Banko Ware is famous as an earthenware pot, and the Banko earthenware pot has an 80 to 90 percent share of the market in Japan. It is not too much to say that almost all domestic earthenware pots you can find in the market are Banko Ware. Banko Ware has an amazing high fire resistant so that it is perfect for earthenware pots that are fired directly by an open flame. Nowadays, Banko Ware is richer in variety than before, for example, Tajine pots (pots for a North Arabian dish called Tajine. In Japan, Tajine has been a very popular dish to cook recently) and pots that are designed especially for induction stoves. Ceramists take a positive attitude towards introducing trends and new technologies.

The Origin And The Development of Banko Ware

It is considered that the history of Banko Ware was started 260 years ago by Rouzan Nunami. The Nunami family was one of the families that thrived around the time, and it was a wholesale store of ceramics. Rouzan Nunami was well versed in the tea ceremony and started to bake pottery. The time he lived was the period of isolation for Japan so that Rouzan imagined how overseas would be and created exotic pottery. He named the pottery as Banko Ware with his wish – ‘Banko fueki (Banko: the name of his store, fueki: unchangeable forever)’. He wished the pottery to thrive as an excellent pottery in any ages. He learned skills and techniques of ceramic from Kyo Ware and especially from Kenzan Ogata, one of the greatest Japanese ceramists and painters. However, the production of Banko Ware was temporally suspended because of the death of Rouzan Nunami. About 30 years later, Banko Ware was started again by Yusetsu and Senshu, brothers who run an antique shop. Yusetsu was good at woodwork and Senshu had an inventive mind. They designed wooden forms to shape pottery and succeeded to create teapots with the forms. In the end of the Edo period (ca. 1780-1867), teapots for green tea was in great demand because people prefer green tea (Sencha) to powdered green tea (Maccha) compared to the time Banko Ware was started. Therefore, the idea and technique of Yusetsu and Senshu became an advantage for Banko Ware to succeed in the Edo period. In the end of the Meiji period (ca. 1911), Torajiro Mizutani developed a new technique – Hanjiki. Hanjiki means half pottery and half porcelain so that Hanjiki has the both features of pottery and porcelain. It is stronger than just porcelain and suitable to form it into a big size. Besides that, the color of painting comes out very well. Before Hanjiki, Banko Ware had been succeeded with its woodwork form technique, but it started to decline because the technique was stolen by other ceramists. Torajiro broke the deadlock by developing the technique of Hanjiki. The year after the development was the change from the Meiji to the Taisho Era so that Hanjiki was named Taisho Ware. Because of the advent of Taisho Ware, Banko Ware made rapid progress and became one of the leading ceramic-producing districts. Nowadays, Banko Ware has more varieties, and it is exported to the world.

The Features of Leading Products

In the following paragraphs, we take a close look at two leading products of Banko Ware – Donabe (an earthenware pot) and Kyusu (a teapot).

As mentioned in the beginning, Donabe is one of the main products of Banko Ware.  The very high resistance to fire makes Donabe able to increase the share of the market by over 80 percent. This feature comes from the nature of petalite (castorite), and the lithium ore content of the Banko Ware clay is 40 to 50 percent. Thanks to the feature of petalite, Donabe of Banko Ware became very famous as unbreakable earthen pots. Besides the high resistance to fire, Banko Donabe has a few more advantages. Firstly, it has an effect of far-infrared rays. The far-infrared rays make it able to heat food efficiency. It is considered that Banko Donabe radiates three to four times more far-infrared rays than metal cooking utensils, such as pots made of aluminum, copper, and stainless steel. Secondly, Banko Donabe is good at holding the heat for a longer time. The reason of that is because the earthenware pots like Banko Donabe requires more specific heats. (The specific heat is the amount of heat per unit mass required to raise the temperature by one degree Celsius.) The specific heat that Banko Donabe requires is double of iron. The last advantage is its design. Unlike other metal cooking utensils, Banko Donabe has a warm impression caused by the feel of material and beautiful paintings on the surface. Because of this feature, Banko Donabe can be directly brought from kitchens to the table.

How To Use Banko Donabe

Before you use Donabe, it is better to do Medome. Since Donabe is made of clay, it sucks up water. Medome is a process to prevent ceramics from absorbing water and also from breaking easily by fire. The process is very simple. You just need to fill Donabe with water and one or two tablespoons of flour and make it boiled. After it gets boiled, leave it until it gets cold and wash it very well. Instead of flour, you can also use water in which rice has been washed. Things you should be careful or avoid when you cook with are – do not heat it while it is still wet, do not use it for deep-frying something, do not leave food inside for a long time after it is cooked (it causes the stench and mold). After you used Donabe, wash it and dry it very well. When the inside of Donabe gets scorched, please add water and boil it first to make the scorching soft and easy to remove. When Donabe smells bad, please add hot water and vinegar (or lemon juice) and leave it overnight. Then wash it very well and dry it completely before you use it again.

Selling points of Banko Kyusu teapot are a very sharp spout, which does not drip after you pour from it and its fine tea strainer. Banko Kyusu is made of clay containing a lot of iron. When iron combines with oxygen during firing, it creates the beautiful color varieties, and it depends on the amount of oxygen in kilns. When it gets enough oxygen, the color changes to bright cinnabar red (vermilion). On the other hand, it turns to be dark reddish brown when it does not get enough oxygen. Banko Kyusu has been gaining supports especially among masters of the tea ceremony because they believed that the taste of tea is better with Banko Kyusu. It was found out that the iron, which is contained in the clay, reacts on tannin (the component of tea, causing better taste) and lessens the bitterness. Thus, you taste it mellower and more delicious. Another feature of Banko Kyusu is that it gets beautiful luster and turns the color deeper during the use. The luster comes from oil from hands and the color change is because of tea incrustation. Since Banko Kyusu does not have a glaze, these factors effect on the surface very well. The longer you use Banko Kyusu, the more beautiful it becomes. As you can see and feel the transformation of Kyusu in a long time, it might be easy to create a strong attachment to your teapot. To keep you Kyusu getting polished and adding tastes and ages, please avoid washing it with soap and rubbing the surface too much as much as possible.