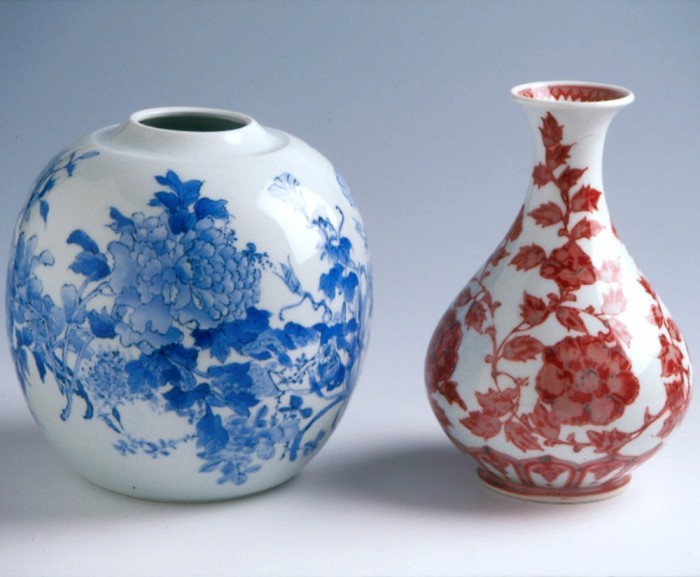 The History of Seto Ware

It is considered that the first time when pottery or porcelain was baked in this region was in the Kofun Period, the mid-third century to the end of the seventh century. It is very early compared to other pottery-producing regions. When Seto Sometsuke Ware (hereinafter called Seto Ware) started to establish its own features was in the Kamakura Period (ca. 1185-1333). As each Japanese pottery and porcelain has different features, such as shape, color, and touch, Seto Ware has many characteristics that distinguish itself from other porcelain. What makes Seto Ware outstanding in the Kamakura Period was that Seto Ware was the only porcelain, which got glazed in the era. Nowadays, glazing is very common, and having glaze is not enough to make Seto Ware different from other porcelain. In the Kamakura Period, however, glazing had great significance. The reason is because the glaze was one of the innovative ways to improve porcelain’s water-resistance at the time. Since porcelain without glaze has a lot of tiny pits on the rough surface, it was very easy to absorb water. The glaze is able to fill the numerous pits, furthermore, it is turned to be glassy and firm by getting baked. This feature of glazing makes it able to keep beautiful coatings the surface. Having glazing techniques as the first porcelain was a great step for Seto Ware because of the following two reasons. Firstly, having a unique feature was crucial to surviving in the competitive market of porcelain. Secondly, it was always a goal for Seto Ware to improve the convenience or the usefulness. Seto Ware was already widely spread as one of the daily necessities among many households so that potters felt the necessary to live up to customers’ expectations. In the case of Seto Ware, having the high water-resistance feature is the way to meet people’s expectations. After the Kamakura Period, Seto Ware got urged to be more special and creative to stand out in porcelain markets because of the entry of a lot of Chinese porcelain into the market around the time. As the tea ceremony got very popular at this time, ceramists of Seto Ware produced more porcelain for that. In the Edo Period (1603-1868), however, Seto Ware suffered from the success of Arita Ware (world-famous Japanese porcelain and one of the competitors of Seto Ware). In 1807, Tamikichi Kato, a ceramist, changed the situation for the better – he came back to Seto region after learning techniques in Arita region. He introduced the skills and gave much effort to improve the productivity. In the Meiji Period (1868-1912), Seto Ware started to export to many countries. While many plates and bowls were exported, some Europeanized works such as coffee cups, saucers, and ornaments were also played an important role to introduce Seto Ware to the world. Besides that, the export of novelties was prospered at this time. Seto Ware had some big customers, such as The Walt Disney Company, and exported ceramic dolls and ornaments to them. After World War II, the rapid economic growth helped Seto Ware to prosper again. However, Seto Ware was starting to face hardships again because cheap Chinese mass-produced ceramics started to appear in the Japanese porcelain market. Moreover, the collapse of Japan’s bubble economy made further attacks on Seto Ware. Nowadays, the number of registered kilns of Seto Ware is a quarter of the one in the golden age of it. The situation of Seto Ware is far from perfectly favorable, but Seto Ware keeps improving with the enthusiasm and skills of ceramists.

The Features of Seto Ware 1: Shapes

One of the features of Seto Ware is that the wide range of diverse types and shapes. For example, plates of Seto Ware have roughly seven kinds – Rinka (means ‘round flowers’ in Japanese; a round plate with a wave brim shaping like a flower), Naga-zara (means ‘a long plate’; a rectangular shaped plate), Hangetsu (means ‘a half moon’; a semicircular, Konoha (means ‘a leaf’; a leaf shaped plate, Mokkou-gata (means ‘wood grounds, bird’s nests’; Mokkou is one of Japanese family crests. This type of plate uses the crest as a motif.), Sumikiri (means ‘cut corners’; plates which have cut corners, and Irizumigaku-zara (means ‘cut corners frame plates’; it is similar to Sumikiri, but it is deeper than that. The edge has a decoration and looks like a frame). Other typical Seto Ware types are bowls, teapots, teacups, and sake bottles. As you can guess from the example of plates, shapes and designs of each type are very diverse.

As mentioned in the beginning, Seto Ware, which we discuss in this article, is originally called Seto Sometsuke Ware. Sometsuke is one of decoration (painting) skills of ceramics, and its process is quite simple. Ceramists draw patterns on the white surface of ceramics with a paint called Gosu (cobalt pigments). After that, the paint is covered by glaze, and its color turns into beautiful blue or purplish blue when it is fired in kilns. The bright blue of paint creates a strong yet elegant color contrast to pure white of the porcelain’s surface. Incidentally, the base of porcelain itself is made of weathered granite called Saba. Saba is mixed with several types of local clay from Seto region, and they give the porcelain a soft and smooth feeling. As the process of Sometsuke (a decoration technique) is very simple, the quality of the painting is directly the value of Seto Sometsuke Ware. The typical patterns are mountains, rivers, flowers, and birds, and all designs are very realistic. The touch of the painting is very delicate and creates a special taste, which makes Seto Sometsuke Ware very outstanding from other painted porcelain. The beautiful paintings of Seto Sometsuke Ware won the praise of many critics in the Universal Expositions in Vienna and Paris. Moreover, it is considered that the design of Seto Sometsuke Ware had an influence on Art Nouveau. One of the points of Sometuske, which require skills and a lot of experience, is creating the exact color that ceramists imagine in their mind. As mentioned earlier, the combination of Gosu (cobalt), glaze, and firing create the color of painting. The color can be from blackish dark blue to bright ultramarine, and very little changes on each factor create the shades. Ceramists need to know the perfect balance to make the exact color they want. Another difficult point of Sometsuke is, needless to say, the drawing skill itself. Especially in the golden age of Seto Sometsuke Ware, the painting skill of ceramists was very inspiring since they trained themselves throughout producing literally thousands of porcelain to meet the both domestic and international demands. It is even considered that ceramists at the age were able to draw exact the same designs many times without any error. Even if they made an error, the error itself was less than one millimeter difference. However, ‘It is impossible to expect the same quality of techniques to present ceramists’, Manabu Kato (a present Seto Sometsuke Ware ceramist) said. The point that he made is the difference between the amount that ceramists produce in their entire life now and before. As mentioned before, Seto ceramists in the golden age produced thousands of porcelain. Compared to them, present ceramists create way much less because the demand is much lower than before. To succeed in the difficult time, what present ceramists focus on more is adding a slightly different shade of color or feeling in each porcelain. In other words, they focus on creating one and only design for each porcelain. As people’s taste and preference are very diverse nowadays, it might be natural to shift the perspective and necessary to be more flexible. The effort of ceramists is shown in the details and the large variety of designs. People feel ceramists’ constant efforts from each tiny parts and touches and appreciate them. This is the advantage of only handcrafted porcelain, even though high-quality print machines are able to produce great patterns on the porcelain these days. The atmosphere, which only hand-painted patterns can create, cannot be imitated by machines. In 1997, Seto Sometsuke Ware was authorized as one of Japanese traditional craft by the Minister of Economy.