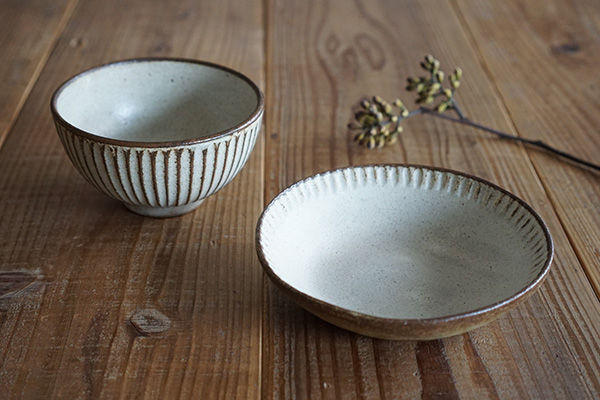 Mashiko Ware (益子焼) is a Japanese traditional pottery from Mashiko Town, Tochigi Prefecture. Compared to other Japanese pottery, Mashiko Ware got established as it is today way much later. Potters in Mashiko Town have been baked pottery for ages. It is considered that the manufacture of present style Mashiko Ware was started in 1853, the end of the Edo period. The originator of Mashiko Ware is Keizaburo Otsuka. When he was a child, he went to a Terakoya (a Japanese private school which was very common in the Edo period. Teachers taught reading and writing to children in the school. It helped to raise the standard of academic ability of children) in Kasama City located in Ibaraki Prefecture. Kasama City was also pottery-producing city (now it is famous for Kasama Ware), and he had a lot of chances to see the pottery production. Later in his life, he got married and moved to Mashiko Town. He worked hard mainly in farming, but he made time to bake pottery since Mashiko Town has great soil for pottery and childhood memory about pottery manufacture encouraged him very much to start it by himself. When the Meiji period (1868) started, Mashiko Ware kept developing and shipped to all over the Kanto region (the middle of Japan) since Mashiko Town had the advantage of being in an ideal location. In this period, a simple yet beautiful painting was invented for Mashiko Ware. However, at the end of the Edo period, Mashiko Ware started to decline because of a couple of reasons. Firstly, more colorful and elegantly decorated pottery, such as Kyo Ware got established and attracted more attention. Secondly, Kasama Ware was beginning to appear on the market more than before. Kasama Ware was a rival of Mashiko Ware since Kasama Ware was the base of Mashiko Ware’s techniques and has many similarities with it. Mashiko Ware lost its uniqueness in the market by the rise of Kasama Ware. The third reason is because of modernization in lifestyle. As other pottery also suffered, people got to pay less attention to Mashiko Ware, traditional crafts. Especially, it was the serious damage for Mashiko Ware that lifestyle in Tokyo got changed drastically since Tokyo was the best consumer city for it. What saved Mashiko Ware was, interestingly enough, the connection with the United Kingdom. Shoji Hamada, a Mashiko Ware, traveled to the United Kingdom to acquire more skills for pottery. He learned a lot during his stay with Bernard Leach, a world famous English potter, and he got a lot of inspirations from Eric Gill, an English sculptor. His experiences in the United Kingdom gave Mashiko Ware additional unique features. Without his efforts, Mashiko Ware could not achieve today’s success nor obtain original and modern impressions that other Japanese pottery never can get.

The interesting part of Mashiko Ware is that it has many features and each of pottery mixes different features to create beautiful combinations. In this section, we take a close look at three features – the color, the glaze, and the pattern.

The color of pottery is based on what kinds of glaze potters use. There are typical seven glazes used for Mashiko Ware. The first glaze is called Nukajiro (rice bran white). As it name suggests, Nukajiro is white and opaque like rice bran is. The ingredient is ash of chaff. Nukajiro finishes the surface of pottery very smooth and soft. The second glaze is called Kakigusuri (persimmon glaze). This glaze contains powdered stone from Mashiko region. Since the stone contains a lot of iron, it creates dark brown or yellowish brown finishes. The third glaze is Kokugururi (black glaze), and it gives pottery to have black yet transparent glazing. This glaze is created by mixing Kakigusuri and ash from plants. The fourth glaze is Amegusuri (amber glaze). It has transparent amber color, and it is created by adding iron oxide and ash to Kakigusuri. The fifth one is called Haigusuri (ash glaze). As you can guess from the name, the ingredient is ash mixed with white clay. It creates a transparent and glossy finish. The sixth glaze is one of the interesting glazes Mashiko Ware has, and it is called Shiogusuri (salt glaze). If you scatter salt in kilns when you bake pottery, the salt becomes gas and turns to be glassy because of a chemical reaction. By combining iron or cobalt, potters can create a brown or blue glaze. The seventh glaze is called Galena glaze, and this is from the United Kingdom. As mentioned before, Mashiko Ware is inspired a lot by pottery in the United Kingdom. This is a traditional English glaze and creates a transparent yellow-brown color finish. Besides these seven types of glaze, there is another way to color the pottery. Slipware is the general term of the pottery which is covered by lead glaze. Before the glazing, usually potters draw some patterns on the pottery. It is considered that this style is from Staffordshire, England after the 17th century.

It is not only the color of glaze that plays a big role to create impressions of pottery. The different ways to glaze also create different impressions of pottery. In this paragraph, we will cover three ways of glazing. The first way is called Nagashi-gake. It is created by pouring glaze from the top of the pottery. During the glazing, potters need to tilt the pottery slightly. The second way is called Uchi-yu. Potters use brush and glaze by tapping or beating the surface of the pottery. By glazing not too gentle, potters can make some undersigned patterns on the surface. The third glazing technique is called Tsutsugaki. To understand this technique, you can imagine squeezing whipped cream to the cake. Potters sack watery mud or glaze and squeeze to draw some designs.

Besides Uchi-yu and Tsutsugaki, you can see some more patterns on Mashiko Ware. The typical patterns are created by combs, ropes, and stamps. With combs, several parallel lines are curved (called Kushime). With ropes, you can create continuous patterns on the surface (called Jyomon). This pattern is very traditional and often seen in ancient Japanese pottery. The last pattern is called Zougan. Firstly potters create grooves by stamps or planes. After that, they color the grooves to make it stand out. All of the patterns are created before the pottery gets dry completely.