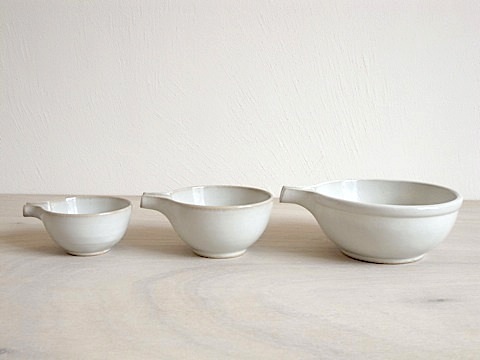 The Outline of Kokuji Ware

Kokuji Ware (小久慈焼) is a pottery from Kuji City, Iwate Prefecture. It is famous as a pottery which has smooth and beautiful white surface as if women’s skin. It has 200 years of history, and it is considered that its originator is Jiemon Kumagai. The techniques he used were based on Soma Ware, which is from present Fukushima Prefecture. Kokuji Ware is made of local clay and glaze, and the ingredients have not changed since Kokuji Ware were started to bake. The region of present Kuji City was not blessed with rich soil for agriculture. In the old days in japan, citizens needed to pay tribute to the ruler. Usually, people presented rice as a tribute, but people who lived in present Kuji City needed to find other options. In short, baking pottery was the best option they could take to live in the barrens. Even though Kokuji Ware was started under the pressure of necessity, it developed to get exclusive supports from a han (a feudal clan). Once Kokuji Ware faced a crisis to discontinue because of the lack of successors, but it managed to survive since Kuji City devoted itself to train potters who can inherit the previous techniques.

The Trick to Keep Clay Fine

The clay from present Kuji City does not contain a lot of iron so that it looks very whitish gray. The clay gets smashed into very fine pieces and mixed with orthoclase and water to make the base for pottery. In December to March in this region, the temperature gets quite low. To prevent the base clay from becoming frozen, potters need to cover it with electric blankets. It is a little trick only present-day potters from the northern provinces of Japan know.

Kokuji Ware has a couple of typical designs that have been baked since the beginning of its history. One of the designs is called Kata-kuchi (lipped bowls). Kata means one side, and kuchi means mouths in Japanese. In short, Kata-kuchi is pottery that has a mouth (a spout), which is narrowed at only one side to pour liquids from it. Kata-kuchi is always the most common design of Kokuji Ware, and the design has been treasured for a long time. Potters add some modern tastes on it by trying out new styles or shapes, but the basic is never changed. In the old times, this type of pottery was used a lot as measuring cups or tools to transfer liquids from one container to the other. On the other hand, nowadays, Kata-kuchi is used in a wide range of occasions. For example, using it as a vessel for sauce or dressing is very practical and recommended. Besides that, it is also suitable yet unique to use it as a vessel for Sake (Japanese rice wine) or hot wine in the winter. The beautiful pure white color of Kokuji Ware makes the color of liquor stand out. The basic design of Kata-kuchi has never been changed, but the edge and the spout of pottery have been sharpened to suit people’s contemporary preferences. Connecting a spout part to a bowl takes very long time, and even skilled potters can create only four Kata-kuchi per day.

As mentioned in the section of Kata-kuchi, Kokuji Ware is very flexible to introduce new tastes to suit people’s preferences that change with the times. However, there is only one thing that potters have never changed since they baked the first Kokuji Ware. It is soil – the core of Kokuji Ware. Potters stick to the local clay called Kuji clay. The clay has high resistance to fire, and its pure white color makes out the color of glaze very well. The typical glazes of it are called Nukajiro-yu (rice bran white glaze) and Ame-yu (amber glaze). As the names suggest, Nukajiro-yu becomes opaque white glaze, and Ame-yu turns to be beautiful yellowish brown after baking. Having pure white color is very important for Kokuji Ware since how much white it gets effects how much the color of glaze is able to stand out. The only the time when potters add sand to clay is when they want to create the feeling of earth. At the beginning, the color of the clay is like the mixture of light gray and light brown. When it gets dry, it turns to be whiter. While potters stick to using the local clay, they keep focusing on improving their techniques. For example, they succeeded to make particles of the clay smaller than before to make much thinner pottery. Furthermore, they invented smoother glaze by changing a combination of it. This improved glaze can be glazed evenly and easily. Potters of Kokuji Ware managed to keep up both cherishing the tradition and attempting new possibilities to improve. ‘It is meaningless to keep baking traditional pottery if nobody is found of it’ – Satomi Shimodake, one of the present Kokuji Ware potters. He also says that it is very important to cherish traditions, but it is also as much as important that people feel free from preconceptions when they use Kokuji Ware. People should feel free to choose where and how to use the pottery. In other words, Potters expect us to use Kokuji Ware as a part of our daily life. Kokuji Ware is not made to be just admired without being actually used. As the eating habits of the Japanese has been Europeanized, potters create plates and bowls that can suit many different kinds of dishes more easily. Kokuji Ware is one of the great successful examples of a fusion of traditions and modern tastes.