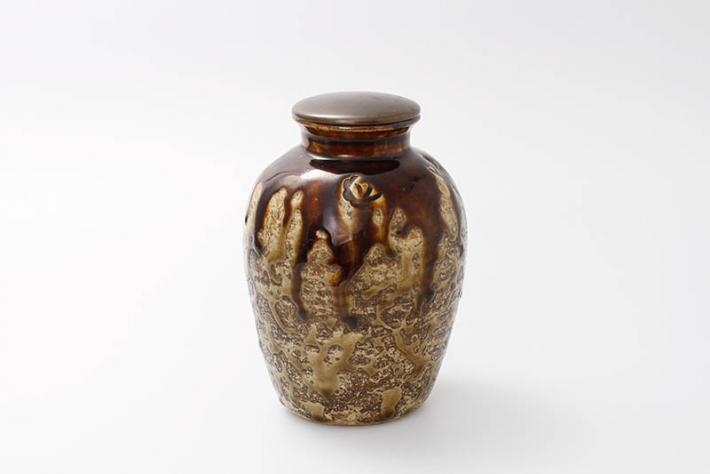 Shitoro Ware (志戸呂焼) is pottery with a tasteful austere design from Shizuoka Prefecture, and it is one of the admirable Japanese pottery. The kilns of Shitoro Ware (also called as Shidoro Ware) are famous as one of seven favorite kilns of Enshu Kobori, a notable expert in the tea ceremony. He praised seven kilns that baked pottery suiting his taste and style very much and called them as Enshu Nana Gama (Enshu’s Seven Kilns). Incidentally, other six pottery are Asahi Ware, Agano Ware, Akahada Ware, Kosobe Ware, Takatori Ware, and Zeze Ware. What all pottery from Enshu Nana Gama commonly has is refined beauty which is related to the tea ceremony. You might have heard the concept of the tea ceremony called Wabi-sabi. Wabi-sabi is deeply related to Japanese aesthetic sense and considered the core philosophy of the tea ceremony. Wabi-sabi is actually a compound word consisting of two different concepts. Wabi itself means a charm or a taste you can find in simplicities or silence. In the tea ceremony, Wabi is eliminating unnecessary things and regarding the spirits of the tea ceremony very highly. Wabi-cha is also used as a pronoun to describe this philosophy of it; cha means tea in Japanese. Sabi is the word to describe a charm that makes us feel the age of things. In other words, Sabi is the special and thought-provoking taste of things. Since Shitoro Ware has both Wabi and Sabi, it uses only subdued colors and gives you an unobtrusive impression.

The History of Shitoro Ware

It is considered that the history of Shitoro Ware started at the end of the 15th century. The region where Shitoro Ware is baked is now called Kanaya, but it was called Shitoro-kyo. This is the origin of the name of Shitoro Ware. The Kanaya region has been famous for rich and perfect soil for pottery. In the 16th century, many potters came to this region from Seto and Mino regions (where produce world-famous pottery Seto Ware and Mino Ware) and started to bake Shitoro Ware. In 1588, Shitoro Ware became very famous all over Japan because it was authorized by Ieyasu Tokugawa, the first Tokugawa shogun (general).

The Features of The Soil from Kanaya

The nature of the soil from Kanaya region gives Shitoro Ware tastes. The soil is very hard and has a feature to become very firm after baking. This nature gives Shitoro Ware to have heavy and solid impressions. Besides that, the soil has high resistance to humidity, and it is perfect as pottery to store dried tea leaves. Usually, Shitoro Ware has dark brown or dark yellow colors, and these colors come from the high amount of iron that the soil has. Kanaya region is also rich in material for a glaze. The red stone called Niishi is the core ingredient for the glaze of Shitoro Ware. Since Niishi also contains a lot of iron, it gives pottery deep and quiet dark color. Especially in the tea ceremony, this dark color is well contrasted by the soft yet bright green of tea. Incidentally, in the region where has nice soil for pottery, like Kanaya, tea trees grow very well. It might be a destiny that Shitoro Ware succeeded as pottery for the tea ceremony in this region.

The Stages of Thriving

As mentioned before, Shitoro Ware began to flourish at the end of the 15th century and developed very much until modern times. The stages of its development can be divided into there. The first stage is called Anagama stage. This stage lasted until the second half of the 16th century. Anagama is one of the old styles of kilns. This type of kilns was created by digging holes on the surface of hills or the ground. The beginning of this time, many potters needed to move to new regions to find better opportunities to be successful in baking because Seto region suffered from a war which happened nearby. Some of the potters moved to Shitoro region, and it was the great chance for Shitoro Ware to grow more. In this time, iron glazed tea bowls or ash glazed pottery were produced a lot. The second stage is called Ogama stage (the stage of big kilns). This stage is started in the latter half of the 16th century. This was the time when Shitoro Ware got authorized by the first Tokugawa shogun. The general gave Shitoro kilns Shuinjo (a license to do business), Shitoro Ware began to appear more on the market. After that, teapots from Shitoro region were favored by successive generals and became offerings to them. In this stage, a great variety of pottery was baked, for example, sake bottles, incense burners, and small plates. The third stage is called Noborigama stage. Noborigama means ascending kilns that are the type of kilns used to bake Shitoro Ware recently. This stage is from the beginning of the 17th century to the middle of 19th century (the Meiji Era). The most produced kinds of Shitoro Ware were pots, jars, and big dishes.

The Types of Kilns

Nowadays, many Shitoro Ware is baked with gas kilns or electronic kilns. However, firewood kilns bake pottery twice per year. Compared to gas and electronic kilns, it is possible to create deeper and tasteful colors with the firewood kilns. Ascending firewood kilns usually have three rooms inside, and it can have around 200 pottery in each room. Pottery is fired with Japanese red pines, which are able to create powerful flames. While firewood kilns can add beautiful shades on the surfaces of pottery, the fire could destroy pottery. Pottery is very delicate and fragile. Only 20 to 30 percent of pottery can be sent to exhibitions or go on sale. Pottery is baked for three days and let them cool in kilns for a week. One of the unique features of Shitoro Ware is called Shichido yaki (baking seven times). As you can imagine from the name, potters bake the same pottery seven times. Every time when potters put the pottery back to kilns, they add another layer of iron glaze. The glaze itself is an ordinal iron glaze, but it is able to create beautiful shades of colors throughout the process of Shichido yaki. Nowadays, firewood kilns bake pottery only twice per year, it is impossible to see this process again.