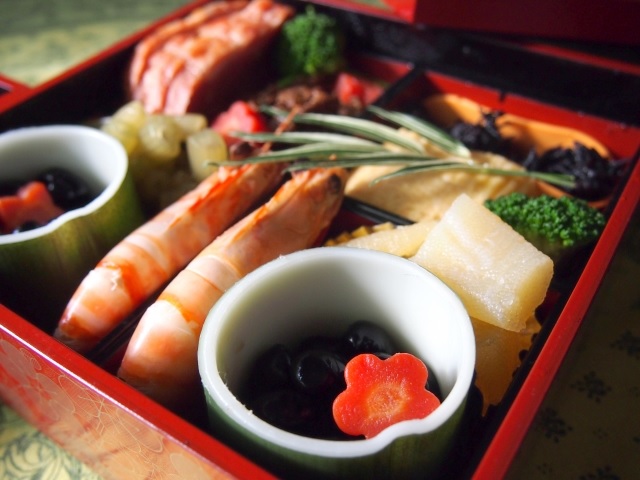 New Year’s Eve and New Year’s Day are the most important holidays throughout the year in Japan, and there are countless traditions and events to celebrate the turn of the year.

It is customary to do a big housecleaning at the end of the year – to be accomplished by the day before New Year’s Eve at the latest. This is called oosōji, “the big cleaning” (where oo means big and sōji means cleaning). People want to get rid of all the dirt that accumulated over the year and get tidied up to welcome the New Year with a sense of inner and outer freshness.

At midnight, an impressive and somewhat mystique Buddhist tradition is practiced, the joya-no-kane. This is the tolling of temple bells at New Year’s Eve. The bell is tolled 108 times, as this is, according to Buddhist beliefs, the number of evil desires that mankind suffers from on earth. Each stroke drives away one evil passion, and eventually those who partake in this ceremony are purified for the upcoming year.

Food is – of course – another important part of the New Year traditions, like the Toshikoshi-soba, the “year-crossing noodle”, a traditional Japanese noodle bowl dish eaten on New Year’s Eve.  It symbolizes ending the old year and beginning the New Year, as the lengthiness of the noodles can be understood as a prayer for longevity.

New Year’s Day, the very beginning of the New Year, is called oshōgatsu, and is the highest of the holidays in Japan. Since Japan is not a Christian country, there are no holidays during Christmas, but instead most employees and workers have a few days off around the turn of the year. During these holidays, family members living all across Japan travel to their hometown and relatives get together to celebrate the New Year – you can just imagine how heavily crowded the public transport and streets are at this time!

At New Year’s Day, many people pay a visit to a Shinto shrine, often opposite to visiting a Buddhist temple the day before (as most Japanese see no contradiction in practicing rites of both religions), and see their relatives to exchange customary New Year’s greetings. Many women put on a kimono this day as a festive dress.

Nenga-jyo, traditional New Year’s greeting postcards, are sent in excessive numbers to friends, colleagues, teachers, superiors or just to those recipients the senders want to maintain or establish some kind of relationship with. Since it is important that they arrive this very day, cards marked as nenga-jyo are withheld by the postal service in order to be delivered exactly on New Year’s Day.

Osechi-ryōri is another traditional New Year food, prepared for three days in five or three stacked lacquerware boxes called jūbako. The arrangement of the food in the jūbako symbolizes good wishes for the family’s well-being and prosperity, for example, kuromame, cooked black beans, are associated with health because of the alternative meaning of mame “healthy”, gold-colored kurikinton, mashed sweet potatoes with sweetened chestnuts, represent prosperity, and kazunoko, herring roe, stands for fertility. However, since preparing osechi-ryōri is quite a laborious matter, there are not few ones these days who don’t prepare osechi-ryōri at all or prepare them for only one or two days.

You might have heard of mochi, Japanese rice cakes, or ozōni, a regionally different mochi-soup. Mochi, usually hard like a brick, are fried until they get soft enough to eat them, but as they are very sticky and chewy, each year some unlucky persons suffocate while eating them. Ozōni with all its variations might just appear as a good alternative!

Kakizome is the event where the first calligraphy of the year is written with a brush, and takes place on January 2nd. A Chinese character or a phrase serve as a resolution for the New Year and conveys the wishes and hopes for the New Year. Frequently used characters are those for “dream”, “success”, “health” and so forth.

January 7th is the day to eat nanakusagayu, rice porridge prepared with the seven herbs of spring. This symbolizes the wish for good health throughout the year and beyond this metaphorical meaning, this porridge can bring relief to the stressed stomachs of all those who have eaten too much osechi or mochi.

All these traditions and customs, whether one follows all or just some of them, help the Japanese to start refreshed and well prepared into the beginning year.