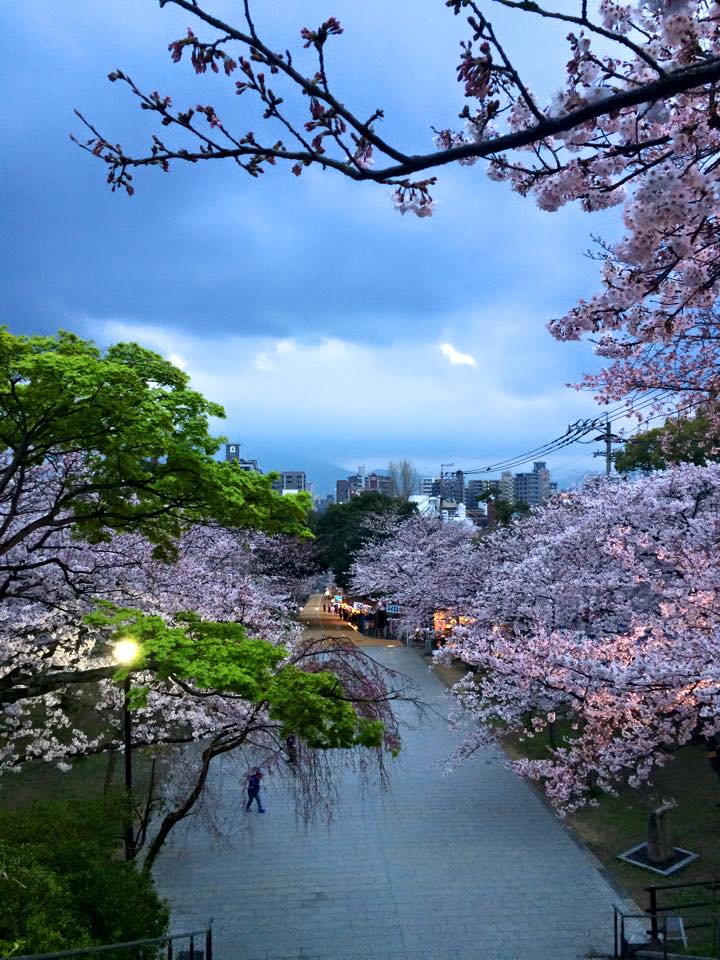 In Japan, the season has now arrived in Japan for flower viewing (hanami). This typically means appreciating the cherry blossoms that are only in bloom for a couple of weeks out of the year. However, the word “hanami” can also be used with other types of flowers, for example, the plum (ume) flowers that bloom during the winter. Hanami is a time to spend with enjoy yourself, others, and the scenery all at the same time.

Hanami is generally done with either friends, family, or coworkers. A group of people usually gets together and goes to a spot that is famous for its cherry tress. Many people will also put down a blanket and eat a bento (Japanese style lunch box). There are many bentos made special for this season that one can buy. Also, a large portion of people also enjoy drinking alcohol as well to celebrate the season. The food, drinks, and flowers make for the ultimate combination.

One special thing about hanami is that many parks in Japan light up at night so that people can do hanami then too. This is perfect for people who want to do hanami after work, but the lights can very spectacular in their own right. The cherry blossoms look quite different in different lights and are exquisite during both day and night.

Not sure where go to do hanami? In Japan, there is usually a ranking put out of the best 100 (1,000) spots for doing hanami. Pick the one closest to you, or why not make it a day trip somewhere? For those living abroad, there are also hanami festivals held in other countries in Europe, Asia, and America. This would be the ideal time to experience Japanese culture even if you can’t make it to Japan!

The Significance of Hanami

Hanami isn’t just merely sitting down and looking at flowers; it is a culturally significant event. This is because that the cherry blossoms start to bloom around the beginning of April (depending on the region), which is also the same time the Japanese school year starts. Consequently, many jobs also begin during this same time. The cherry blossoms blooming symoolizes a fresh start to the Japanese, and this season is almost like a second New Year’s.

However, hanami doesn’t just signify a new start, but also an end. Once the cherry blossoms are in full bloom, they soon start to wither away with the entire season only lasting about two weeks. This reminds us of the impermanence of everything and that everything has a beginning and an end. Therefore, it is not just a time of celebration, but also a time for deep reflection.

Hanami is a very significant part of Japanese culture, and the large cherry blossom trees are definitely a sight to see. If you happen to be in Japan during the spring, I would strongly recommend trying hanami. You will thank me later.