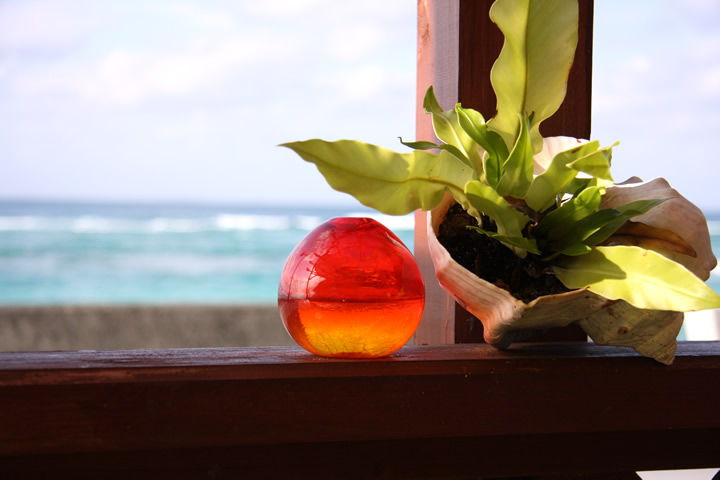 1. The origin of Ryukyu glasses.

The foot print of Ryukyu glasses can be found in the beginning of 17th century when Ryukyu Kingdom faced the different political situation under the new Japanese Bakufu and influence of China’s Qing dynasty（Takara 1989）.
Mainly depending upon a historical record, Kyuyó（球陽）, the scholars of Ryukyu regional studies mostly agreed upon that the wide spread & popularity of Ryukyu glasses manufacturing throughout the Okinawa Island could be originated in the tributary system among the Ryukyu Kingdom（琉球王国）and Qing Dynasty, China. Although the invasion by the Satsuma, one of the biggest federal domain of Japan`s new government, Edo Bakufu(1603-1867) took place in the beginning of 17th century and Ryukyu kingdom has quickly influenced by it, some scholars has continually been sent to Qing Dynasty or continent of China in 17th centuries.

Tenstu（典通）was one of the envoys that time. According to the Kyuyó, Tenstu has learned the glass making techniques in Beijin, the new capital of Sin Dynasty, and then he brought these technique back to the Ryukyu. It has recorded in Kyuyó, the glass making techniques of 5 vivid colors became one of the Kingdoms new demands in that periods.
Not surprisingly though, Tenstu`s contribution for vivid glass making can be found in the Ryukyu Kingdom’s most important construction, Enkakiji (built in 1494) where the formal diplomats of Mongolian Empire and other foreign diplomats were welcomed (The Enkakuji（円覚寺） was named after one of the most famous Zen temples built in Kamakura Bakufu Era (1192-1333), Japan). The stature of Buddhist Priest, founder of Enkakuji （開山和尚像）has the artificial glass eyes, and that was believed Tenstu’s creation, the most advanced techniques brought back from China at that time.

Ryukyu glass manufacturing flourished in the beginning of the 20th centuries. The first factory, Maeda Glass Factory（前田硝子工場） was built by glass craftsmen from Osaka and Nagasaki. Both cities were known for ones of the biggest trading towns of Edo Bakufu (1603-1867).
Usually 5-6 craftsmen worked in the small factory at that time. Inside, working space of the factory was very simple (see figure Takara 1989 p40). There were just the glass melting furnace and the cooling kllin. By the beginning of 20th centuries, one of the major obstacles of Ryukyu glass factory was the material acquisition. The materials for Ryukyu glass at that time was the broken junk glasses. It was difficult to obtain because they are just limited amount exit among the people in Okinawa.

In the beginning of 20th centuries, some of the glass production include beautiful transparent fly winder（蠅とり器）, pickles container（漬物容器）, square shaped dagashi (cheap candy) container（駄菓子入れ）, fount（石油壺）and dosing pots（投薬容器）. As a matter of fact, those products gain much popularity throughout the Okinawa Prefecture, and those were even sold to Yaeyama regions, the Northern parts of Okinawa, and many isolated small islands around Okinawa.
But sadly, most of products in earlier days were lost in WWⅡ, and so was the factories. Two years after the war, the Maeda Glass Factory was eventually rebuilt in Naha, but three years of operation, business went under (the reasons are uncertain). Present name, Okuhara Glass Factory was named after the man who bought the Maeda Glass Factory by answering the wishes of local for continuing first memorial glass factory in Okinawa, Okuhara（奥原硝子製作所） led the fallen glass factory to the main stream again.

After the WWⅡ, the products in Ryukyu glasses has been changed as well. The American troops brought the pictures of what they needed, for example the vivid cups, the jugs, the punch balls and the decanters. So, the Ryukyu glass factories needed to invent and produce new supplies. What they come up with was the application of coca-cola bottles newly brought to Okinawa as a new materials. That demand and supplier’s effort eventually have led to the present form of Ryukyu glass production, the different types of glasses, plates, even i-phone speakers in the souvenir shop.

3. The glass making methods and materials

The method of glass production include 1) material preparation, 2) melting, 3) molding, 4) cooling, 5) product inspection.
1) In the material preparation, the colors of glasses are decided. The main materials of the glasses has long been broken junk glasses. It was so before, and in some places it is now so as well. Before WWⅡ, white bottle, sho bottle (1.8 litres of Sake bollte) and soy sauce bottle were the major sources of materials. After the occupation by American troops, the coca-cola bottle, whisky bottle, seven-up bottle have been used, and then coloring of Ryukyu glass started.
According to the academic source (Takara 1989), the trend that some glass factories have tried to develop the glass materials from locally supplied silicate sand, not depending on irregular supply of broken junk glasses could be seen in 1980’, but it was still difficult task for the most of the factories because of the high cost of development by their own.

Basically the coloring of glasses are choices of two methods. One of which is to color whole glass materials with metallic oxide in material preparation. The other is to coat the surface such as lusterware, Ironic exchange method of Silver sulphate, Copper oxide. Interestingly though, the colors of Ryukyu Glass in the past has long been decided based upon the colors of the materials, broken junk glasses. For example, mix of the beer bottles chunks and other transparent bottle chunks becomes the creation of beautiful thin brown color of Ryukyu Glass. Coca-cola bottle chunks changed to the vivid blue color in Ryukyu Glass. Seven-up bottle chunks mixed with others became beautiful greenish color of Ryukyu glass. According to the Takara (1989), at least 10 different colors are produced in his time of research. Nowadays it becomes more and more. Recently, the chemicals are also used. For example, coloring the orange like reddish color of Ryukyu glass, one of the most popular as survivor shop is colored by selenium, so as Cobalt as blue, Potassium dichromate as green.

2) Melting of those materials usually took whole night in the melting furnace at 1300℃.
3) There has been development of several ways of glass molding. One of which is hand blown glass（宙吹きガラス）. In its method, the glasses heated and melted in the melting furnace, are attached to the iron pipe, and then blew by craftsmen, the glasses expand. The hand blown glass method has been used long, and it has been the major techniques nowadays as well.

4) Cooling of glass also took whole night in the slow cooling kllin at 600℃.
These process requires the 4-5 craftsmen’s work as a team. One heated and melted the glasses, and the one blew and so on. It has to be done in quick manner. According to the Takara (1989), one of the characteristics of Ryukyu Glass is the softness feeling that gives to the customer, compare to glass sharpness of others. He assume that it maybe come from the materials which are originally comes from the mixes of broken junk glasses, and also quick way of producing makes each glasses different and become softer looking as a result.