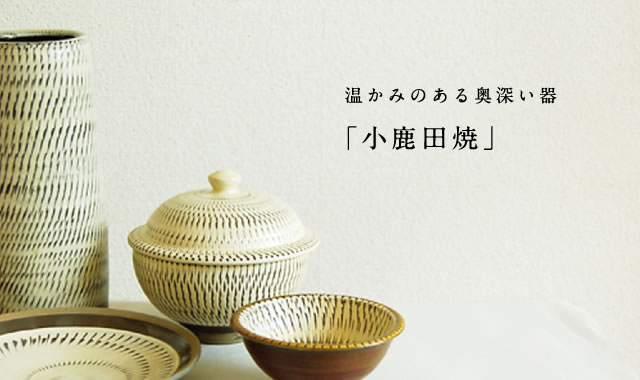 Onta Ware (小鹿田焼) is a Japanese pottery from Oita Prefecture. The beauty of Onta Ware is its simple yet fine design, and you get a warm feeling as soon as you touch or hold the pottery. The reason why people attach to Onta Ware is because Onta Ware is designed to suit people’s daily life as a folk handicraft and makes them feel a sense of closeness. In other words, it is designed to be a tool for people not to be a work of art. A village that Onta Ware is baked is located the northern part of Oita Prefecture. The village is also called as Sarayama. It is considered that the origin of Onta Ware is in 1705, the middle of the Edo Period. The techniques were brought from Fukuoka Prefecture, which is located next to Oita Prefecture. Since potters built kilns in Onta region, they keep up the tradition and has been handed the techniques down from father to son. Now only ten kilns fire Onta Ware. Onta Ware became famous as pottery that is loved by Bernard Leach, a great British potter. In 1954, he visited Onta region and took part in baking. The reason why sometimes you can see exotic designs in Onta Ware is might because of the influence of him. In 1995, Onta Ware was recognized as an Intangible Cultural Property by the Japanese government.

Onta Ware is made of red clay, so that you can feel the strength and the warmth of clay from the surface. You can even feel as if you smelled earth from it. As it looks quite solid, you might guess that it would be heavy. In contrast to its impression, its weight is quite moderate. Besides that, the price of Onta Ware is very reasonable even though it is baked in kilns with traditional techniques. As for use and price, Onta Ware is considered as a folk handicraft and liked by many people as a part of their food culture. On the surface of Onta Ware, glaze or some decorations are added. For glazing, white glaze, amber glaze, and yellow ash glaze are common. For decorations, potters use some tools to make different designs. The typical styles are small dots or fine lines designed radically or all over the surface. One of the techniques is called Tobi-kanna. While potters rotate potter’s wheels, they scratch the surface of pottery at equal intervals with an iron plane before the pottery gets completely dry. This is one of the techniques that Bernard Leach was very fascinated with. Potters also use a comb or their fingers for other designs. What the common feature of all designs is that they are designed to make the nature of clay stand out.

The Unique Features of Onta Ware: Clay and Sarayama Village

All clay which is used for Onta Ware is from Sarayama (Onta) region. The entire Sarayama village is located on the great earth that is suitable for pottery, and potters can reach the rich stratum by just digging the surface of the ground a little bit. Potters cooperate with each other to gather soil twice or three times per year, and the soil is distributed equally to each kiln. After that, potters put the soil in wooden mills and crush the soil to make it moderately fine for shaping pottery. One of the unique points of Onta Ware is that almost all manufacture processes have not changed since it was started. Especially, tempering the soil with wooden mills is very traditional and adds additional taste and feature to the process of creating Onta Ware. Like water mill, the mill is designed to utilize the power of a river located in Sarayama region. The structure of the mill is quite similar with Sozu (Shishiodoshi). Sozu is a water-filled bamboo tube which clacks against a stone when emptied. You would have ever seen it in Japanese gardens. The water mill has a log on the edge of the river. One side of the log is curved to collect water on it, and the other side of the log is connected to a mallet. When water fills one side of the log, the mallet on the other side is raised accordingly. As soon as the water overflows from the hole, the mallet swing down and crush the soil. Whenever the mills move, the logs make strong yet pleasant wooden sound. As potters keep using the same technique since they started to make Onta Ware, this wooden sound echoing throughout the village nowadays is almost the same as the one sounded 300 years ago. In other words, you can feel and experience the old days of Sarayama region as if you were there 300 years ago. This is one of the special charms that Onta Ware has. The sound of water mills is officially valued as one of the precious sounds in Japan; moreover, Japanese government recognizes the sound as one of 100 beautiful sounds that must be preserved. This traditional milling process takes around two weeks until the soil gets fine enough. The next process is elutriation. After that, potters dry the soil perfectly, and finally, they can start shaping pottery. This whole processes for purifying soil take even two months. While potters in other pottery-producing districts use machines for it, potters of Onta Ware stick to traditional techniques. It is because they cherish the tradition more than time or trouble they could save. As mentioned in the beginning, the techniques of Onta Ware have been inherited from fathers to their sons. Furthermore, all manufacture processes are done by potters and their family. It is no exaggerations to say that Onta Ware is the family business. In Sarayama region, men are in charge of gathering and tempering soil, shaping pottery and firing them. On the other hands, women are in charge of tasks that do not need a lot of power, such as elutriating soil. Since potters started to bake Onta Ware in this region, they decline to introduce machines, hire potters from other regions and take pupils. To keep the tradition, they decided to divide up the work among family instead of taking additional support from outside of the village. The warm feeling that you can get immediately by touching Onta Ware might be because of the family atmosphere in manufacturing.