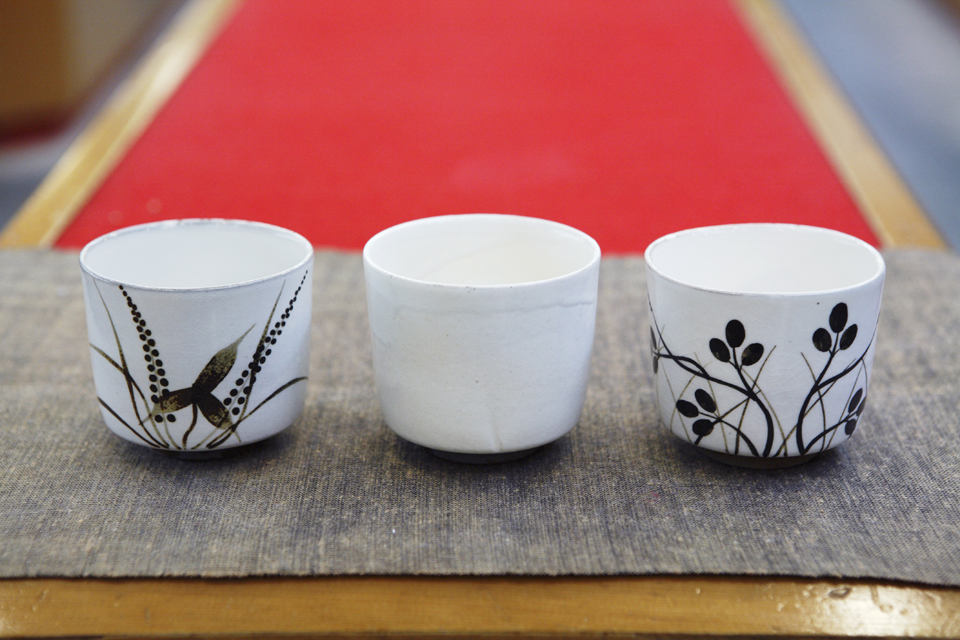 Karatsu Ware (唐津焼) is a Japanese traditional craft from Karatsu City, Saga Prefecture. It has over 400 years of tradition, and it is recognized as one of the three great Japanese tea pottery. Although various theories of its origin, it is considered that the first Karatsu Ware was baked in a feudal estate of Matsuura Clan in 1580’s. Matsuura Clan had the biggest power in all over the region of present Saga Prefecture. Karatsu Ware succeeded to improve its technique and increase productivity with the help of Korean potters after Bunroku-Keicho no eki (Japanese Invasions of Korea, 1529-1598). In the Edo period (1600-1868), kilns for Karatsu Ware were supported by Karatsu Clan, and they became official kilns that bake for the clan exclusively. In 1868, however, local administration system run by clans was abolished and replaced by the present prefectural system. Since then, Karatsu Ware lost the strong backup, and it was steadily declining throughout the Meiji period (1868-1912). The turning point of Karatsu Ware was brought by a potter called Muan Nakazato. He is one of Living National Treasure of Japan, and he revived old technique of Karatsu Ware, which passed into oblivion. (Incidentally, the technique was popular from the Momoyama period to the early Edo period, ca. 1580-1640.) Because of his strenuous efforts, Karatsu Ware got more potters who work on its improvement, and it led to nowadays Karatsu Ware success. Lately, more potters incorporate modern idea or designs into traditional techniques, and about 70 kilns bake Karatsu Ware in all over Karatsu City.

Since Karatsu Ware is made of coarse clay, the impression of it is vigorous yet beautifully simple. This is one of the characteristics Karatsu Ware has and keeps attracting many people’s attention from ancient times. Another charm of Karatsu Ware is having ‘Yo no bi’, which means the beauty we can find in the use of something if the word is translated word to word. Having Yo no bi means that pottery can be completed only after it is used. In other words, this type of pottery cannot be perfect or completely appreciated if it is just watched and not used. There is a saying to describe the concept – 80 percent of the pottery is created by potters, and the rest of it is completed by users. This is the fascinating feature of Karatsu Ware, and at the same time, it is the beauty of it as a pottery which used for daily life. Besides this feature, Karatsu Ware is famous for a greater variety of designs and techniques compared to other pottery in Japan. There are six types of Karatsu Ware: Picture Karatsu, Dappled Karatsu, Black Karatsu, Korean Karatsu, Mishima, and Powdered Karatsu. In the following sections, we take a close look at each of them.

Picture Karatsu is called E-garatsu in Japanese. Incidentally, E means pictures, and garatsu is the same as Karatsu. Ka became a voiced consonant (ga) due to one of Japanese grammar called Rendaku; ‘Rendaku (“sequential voicing”) is a phenomenon in Japanese morphophonology that governs the voicing of the initial consonant of the non-initial portion of a compound or prefixed word.’ (Wikipedia) E-garatsu is the mainstream of Karatsu Ware and the most popular type. It is considered that Karatsu Ware is the first pottery that got painted among all Japanese pottery. The pottery is made of light brown color clay that contains relatively small amount of iron. A solution of iron called Oni-ita is used to draw pictures. Motifs of E-garatsu are things familiar to anybody, such as plants, trees, flowers, and birds, and these pictures are drew with brushes or fingers. The picture is quite simple, but it has both vigorousness and fineness.

Dappled Karatsu is called Madara-garatsu in Japan, and it is also known as Shiro Karatsu (White Karatsu). As you can guess from its name, it has many black or blue speckles on its surface. The speckles are formed since some materials of pottery, such as iron contained in clay or ash from firewood (pine trees) melt and flow out to the surface. For glazing, opaque white ash glazes are used, and this is the reason why it is also called as White Karatsu. Madara-garatsu is a traditional type of Karatsu Ware, and it is considered that Madara-garatsu originated in the latter part of the 16th century. These days, many potters put efforts to reproduce pottery of the century and keep challenging their techniques.

Black Karatsu (called Kuro-garatsu) is made of high iron containing clay or glazes. There are roughly three techniques to create Kuro-garatsu. The first technique is using high iron-containing rocks. Potters crush the rocks and mix it with ash glaze. The second way is simply using clay which containing a lot of iron. The third technique is dissolving mud that contains a lot of iron in the water, and pouring it on pottery or soaking pottery in it before baking. Although the general term for this kind is Black Karatsu, this type has a variety of colors. This variety happens because of the amount of iron that rocks or clay contain, or the degree of oxidation. Common colors of Kuro-garatsu is amber, yellowish brown, and blackish brown.

Korean Karatsu is made with the technique of using two kinds of glazes. One is containing a lot of iron, and the other is containing ash. Due to colors of glazes, Korean Karatsu is famous for beautiful black and white color contrast. The common pattern of grazing is adding iron glaze on the lower half of pottery, and pouring ash glaze from the top of the pottery. The ash glaze trickles down the surface and touches the edge of the iron glaze part, and these two glazes blended themselves naturally and create stunning shades of colors. At the borderline between black and white, some light colors appear, such as light blue, light purple and light yellow. There are also other patterns of glazing, for example, adding iron glaze on the upper part of the pottery and adding ash glaze on the lower part of it. Furthermore, adding one of the glazes on the right-hand side and glazing the other on the left-hand side, and vice versa. Potters often liken the borderline of two colors to beautiful scenery and design it.

Mishima is made with the technique that was brought from Korea. In Karatsu region, Mishima has been baked since the Edo period (ca. 1600-). Before pottery dry completely, potters put emblems on the surface. There are some kinds of emblems, and the emblems are the feature of Mishima. After that, potters put muddy water on the surface of pottery and glaze on the top.

The last kind is Powdered Karatsu. It is originally called ‘Kohiki’, and it is considered that it was named after the feature of the surface – it is as if it was powdered or having white deposits on it. Like Mishima, Kohiki also gets muddy water on pottery, but the method is different. In the case of Mishima, muddy water is added like glaze, but in the case of Kohiki, pottery soak in the muddy water. Original color of clay is brown, but the surface of pottery turns into beautiful white color by adding white muddy water. After this part, potters let the pottery dry completely first and glaze on the top. This technique used for Kohiki is a traditional one, which has been used for many years in Korea, but it was not used for Karatsu Ware before. This technique was introduced recently.