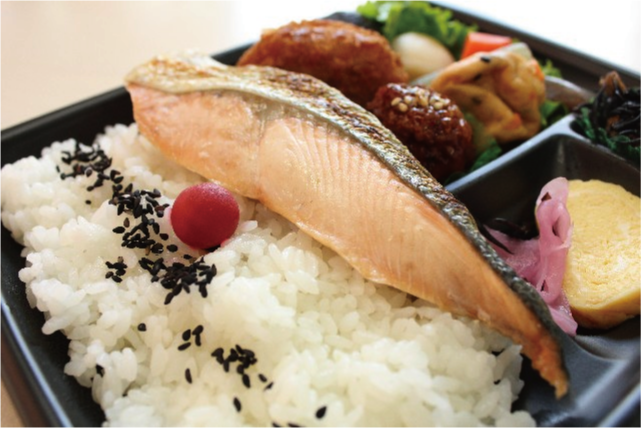 Japan is a busy society where even the youngest stay outside the home over lunch from kindergarten days on. Preparing a lunch box with a variety of ingredients is thus an important part of Japanese everday’s culture and cuisine. Traditionally, homemakers prepare bentō (弁当) – the term was imported from an old Chinese term meaning “convenient” or “convenience” – not only for the kids, but also for the spouse or even for themselves. But nowadays, buying them at a bentō-ya, a special bentō shop, is also very common.
A typical bentō is prepared in one or two stacked boxes, which range from mass produced plastic boxes to handcrafted laquerware boxes. To provide a balanced diet, especially for the youngest ones who need a little motivation to eat their vegetables, all ingredients are lovingly aranged in the compartments of the lunchbox. Cooked rice is never missing, other ingredients are shake (broiled salmon), tamagoyaki (sliced rolled egg), kara-age (fried chicken), small sausages (for the children often cut and fried to resemble an octopus), tsukemono (vegetables pickled in salt, brine or a bed of rice bran), or umeboshi (Japanese salt plums). But the variety doesn’t end there, as the homemakers and bentō-ya try to create ever new variations and highlights.
The classical bentō is the maku-no-uchi bentō, which means “bentō between the curtains”, since it was originally served during the intermissions of Noh and Kabuki theater performances, dating back to the Edo Period (1603 to 1867).
From this bentō, the classical appearance in the rectangle wooden boxes with dividers originate, but there are several other bentō styles like chūka bentō, a Chinese style bentō, or the modern kyaraben (Character bentō), where the food often is decorated like popular characters from Anime or Manga comics. It is quite a “Japanese experience” to find those little kitchen tools which, for instance, press the cooked rice in the shape of a “Hello Kitty”-head (the eyes are then perhaps made of black sesame seeds and the whiskers are made of small nori slices).
Ekiben are bentō which are sold at train stations for the hungry traveler, and they vary from region to region or are even very characteristic for a region, like the kamameshi bentō in the Nagano prefecture. Some people think Ekiben are worth the journey alone!
Bentō are an intimate part of the Japanese culture, since this is what the mother gives their children to take with them when they stay away from home for a whole day for the first time. Many Japanese think that eating bentō helps diving deep into Japanese culture in a very pleasant way – so why don’t try it out for yourself?