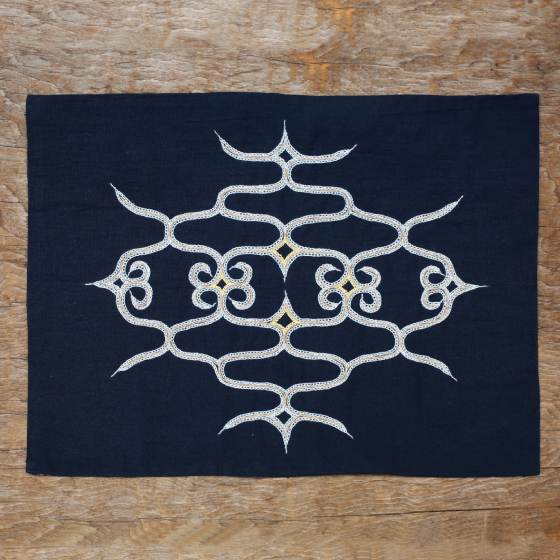 The “Attus” are traditional clothes of Ainu people（アイヌ民族）. Ainu are the people or ethnic groups that has been living in the north Island near Japanese main land, Hokkaido（北海道）, Kurile（千島列島） and Sakhalin Islands（樺太島）. Their hunting and gathering ways of life have gotten many scholarly attentions in many academic fields for long period of time.
Winter time, those regions become incredibly cold. The snow start covering the land from November and the severe blizzard blows, Ainu have been long facing those vast snowy fields.
Ainu have been wearing Attus clothes for long time. But not like the past centuries, those traditional Attus wearing Ainu people cannot be seen anywhere in Japan. They have been mixed with immigrants from main lands, and spread throughout many parts of Northern regions. In Hokkaido only, there believed to be higher population density in the Shiretoko peninsula（知床半島）, the north eastern lumpy parts of Hokkaido.
Remarkably, the Attus varies much not only by base materials but also by regions and designs. The materials varies from the animal skin（獣皮）, fish skin（魚皮）, to bark fibers（樹皮）, glass fibers（草皮）and cottons（木綿）.

After arrival the cotton by the cargo ships which sailed the Japan Sea during the Edo period, the variety of “Attus” were flourished. The Varieties are so many, and their categories are still under debates.
Varietal uniqueness of Attus starts from the garment of animal skins. This include animal skins of Japanese bear, dear, dogs, seals, sea otter（ラッコ）, pacific salmon（鮭）, and a trout（鱒）. The bark and glass fibers are also interesting. This includes elm spp（ニレ科）, linden, Japanese elm, and nettles（イラクサ）.
After arrival of cotton, the many Varieties of Attus arose. In The middle Edo era（江戸時代中葉）, when Matsumae(松前藩), the one federal domain dealt trading with Ainu, shipped the cotton clothes. Since the cottons are suitably warm in those cold regions, and quickly distributed to Hokkaido Ainu regions. The amount of exported cotton clothes drastically increased by time, and they were spread out. The remnant cotton Attus are more than others in number. The followings 4 catgories are those different Attus based on cotton usage.

The shape of Attus is just as a half-length Japanese coat type, but there are many steps of making. This includes 1). The fiber collection and its breaching, 2). Warping and weaving, 3). Sewing, Appliques, and Embroidery. The following processes are the guidance for the bark fiber type traditional Attus making described by Yoshimoto in “The Clothes of the Ainu People”.

To make the traditional Attus, the bark of elm tree spp (オヒョウ) is used. The best time for collecting elm barks come after the rainy seasons of early summer when there are much more waters inside the barks. Then peeling the barks and soaked into the nearby ponds for approximately 10 days. After 10 days of soaking, the darts and impurities would wash off by clear water in the river and several layers would be peeled until the layers become one single thin sheet. Those thin layer then would be dried until they are breached by sunshine. Eventually the color of peeled thin bark layer become colorless white.

The dried thin layers then would be stripped by fingers to single lines. The end of obtained lines are tied together, and the line become long strings. Those long strings are then wound to the wooden pole and cloth beam, so that the lines are ready to be woven. Walking again and again those wooden poles and cloth beam. After setting up the warp line, the heddle(綜絖) is set, and then start weaving with loom（織機).

The lines are straightly woven to the fabrics, and those fabrics are then cut and sew together for basic shapes of Attus (half-length Japanese coat type). After the shape of Attus are sewn, then other dark woven cotton clothes are cut into the desired figure and sewn together as applique. The potions of applique is then decorated by embroidery.
Attus registered as Japanese traditional craft is called Nibutani Attus（二風谷アットゥシ）where the few products of Attus craftsmen are still produced in small scale.